PARABLE OF THE MUSTARD SEED 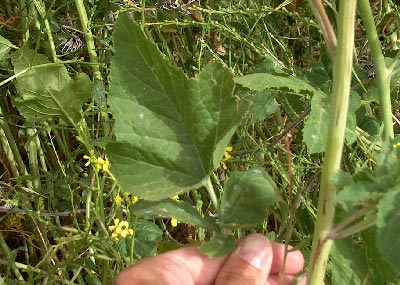 MARK 4:30 (WEB) He said, “How will we liken God’s Kingdom? Or with what parable will we illustrate it? 31 It’s like a grain of mustard seed, which, when it is sown in the earth, though it is less than all the seeds that are on the earth, 32 yet when it is sown, grows up, and becomes greater than all the herbs, and puts out great branches, so that the birds of the sky can lodge under its shadow.”

There is a statement in some Gospel translations describing the mustard plant as a tree with birds lodging in its branches. It can be a tall annual, but there was no mustard tree growing along the shores of the Sea of Galilee. I have seen sparrows and a finch resting on mustard plants, but not nesting there. Something was lost or distorted in translation and copying. The Bible is part fact and part fiction. In no way shape or form is it inerrant. Some people have learned of God's salvation by reading and understanding the better parts of the Bible.

The mustard type shown above grew wild in fields and along roadsides around Galilee. I observed a mustard plant in the southern Golan near Avne Eitan and measured its height to be 8'10". In my opinion there might have been taller mustard plants that I have not measured due to the fact I had spent little time in Israel or was unable to stop along a busy highway to measure a giant plant near Haipha. There were published accounts from travelers from the 19th century onwards of mustard plants from 10-16 feet tall without photos.

There were tall mustard plants near where the Jordan River flowed into Lake Galilee/Chinnereth. During mid-April of 2005 these had produced seed pods and dried up after the winter rains stopped.

From a report about mustard oil seed crops in India from 1976, India accounted for 30% of world production. Indian mustard production accounted for 9% of Indian agricultural production. The seeds were grown for their edible oil content. They contained 30-48% of their weight in oil. During the time of the study it was generally more profitable for a farmer to sow mustard seeds rather than wheat in terms of return on investment and acreage used. Pliny the Elder listed numerous oil bearing plants from Egypt in his Natural History. Healthier mustard oil hybrids were developed in the 20th century with lower levels of some organic compounds that were shown to be toxic to animals.  According to the Talmud, dating to the days of Jesus, mustard may have been used in a sauce as a condiment for meat.
1) AN AGRIBUSINESS STUDY OF THE ...MUSTARD SYSTEM, BY K.K.S. CHAUHAN CMA MONOGRAPH #52, 2) MUSTARD: BRASSICA NIGRA L. CULTIVATION, PROCESSING AND MARKETING IN SRI LANKA, BY ARIYA ABESINGE, MINISTRY OF PLANTATION INDUSTRIES COLOMBO 1. JAN. 1975, 3)  Mustard Marketing in Western Tarai, Ministry of Land Reform, Agriculture & Food Agricultural Economics Section Singha Durbar, Sept. 1967 (Nepal).

According to archaeologist James Melaart, the ancient inhabitants of Catal Huyuk in Turkey had extracted vegetable oil from almonds, acorns, pistachios, and crucifers (mustard family vegetables). This occurred during a time from about 6500 B.C. to 5500 B.C. Earliest Civilizations of the Near East, James Melaart, 1965.

Mustard greens are heart and brain healthy. A diet discovered by a Rush University researcher indicated greens including mustard greens are part of their "MIND Diet" that reduces the risk of Alzheimer's Disease by more than 50%. The diet was published in 2015 and is called the "Mind Diet," as it reduces risk of cognitive impairment in older people at risk of dementia. Mustard greens contain vitamin K, A, C, E, B, protein, minerals, phytochemicals and flavonoids.