PARALYTIC LOWERED THROUGH A ROOF AT CAPERNAUM 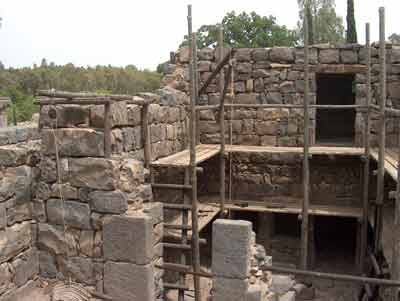 This photo is of a restored Talmudic era village modeled on the ruins of a fourth - eighth century village at Qatzrin in the Golan Heights. Similar basalt construction was found in the ruins of Capernaum during the time of Jesus.

The unhewn logs were used as rafters with branches and saplings as cross support. The top was overlain with tightly packed clay. Terracotta roof tiles were not known in rural Galilean villages during the first century AD, but were known in the region during Byzantine times.

From Capernaum National Park I was able to look to the east and see the saddle shaped ridge that Gamala was built upon. At Gamala destroyed during the Jewish-Roman War 64 - 70 A.D. by the Romans; plaster was used on the roofs of the finer homes instead of clay. There were no clay tile roofs seen at Gamala.

The Gospel writer Luke reported a paralytic man was lowered through the tiled roof. It has been suggested the Greek for clay tile might have also meant packed clay. Many roofs of the Galilean villages were overlain with packed clay. As late as the early 20th century some of the roofs in Tiberias were of packed clay. Reports of clay leaking during heavy rains were commonplace. Sometimes grass sprouted from peoples rooftops. Luke or a later copyist might have been from a village with clay tile roofs and recorded the roof as clay tile out of a bias of thinking roofs were made of tile.

Luke 5:19 And not finding by what way they might bring him in because of the multitude, they went up to the housetop, and let him down through the tiles with his couch into the midst before Jesus.

Flat topped roof of timber and branches overlain by packed clay with clay pigeon house on edge of wall.

Mark 2 (WEB) When he entered again into Capernaum after some days, it was heard that he was in the house. 2 Immediately many were gathered together, so that there was no more room, not even around the door; and he spoke the word to them. 3 Four people came, carrying a paralytic to him. 4 When they could not come near to him for the crowd, they removed the roof where he was. When they had broken it up, they let down the mat that the paralytic was lying on. 5 Jesus, seeing their faith, said to the paralytic, “Son, your sins are forgiven you.” 6 But there were some of the scribes sitting there, and reasoning in their hearts, 7 “Why does this man speak blasphemies like that? Who can forgive sins but God alone? 8 Immediately Jesus, perceiving in his spirit that they so reasoned within themselves, said to them, “Why do you reason these things in your hearts? 9 Which is easier, to tell the paralytic, ‘Your sins are forgiven;’ or to say, ‘Arise, and take up your bed, and walk?’ 10 But that you may know that the Son of Man has authority on earth to forgive sins” —he said to the paralytic— 11 “I tell you, arise, take up your mat, and go to your house.” 12 He arose, and immediately took up the mat, and went out in front of them all; so that they were all amazed, and glorified God, saying, “We never saw anything like this!” 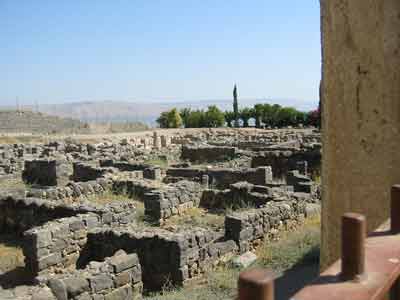 A view from the white synagogue at Capernaum towards the lake. These are the ruins from the first few centuries AD. The houses were built of basalt igneous stone same as at the Talmudic era village discussed above.