THE FISH AND THE COIN

The tilapia also known as the musht is native to Lake Tiberias and was observed by nineteenth century naturalist H. B. Tristram. There are several species of tilapia type fish in the "Sea of Galilee", a.k.a. Yam Kinnereth, Lake Tiberias, Chinnereth. Some have reported the tilapia is St. Peter's fish.

Matthew 17:24 (WEB) When they had come to Capernaum, those who collected the didrachma coins[a] came to Peter, and said, “Doesn’t your teacher pay the didrachma?” 25 He said, “Yes.” When he came into the house, Jesus anticipated him, saying, “What do you think, Simon? From whom do the kings of the earth receive toll or tribute? From their children, or from strangers?” 26 Peter said to him, “From strangers.” Jesus said to him, “Therefore the children are exempt. 27 But, lest we cause them to stumble, go to the sea, cast a hook, and take up the first fish that comes up. When you have opened its mouth, you will find a stater coin.[b] Take that, and give it to them for me and you.”


It is assumed that if a fish has a habit of picking things up off the bottom of a lake, it might be used by God to pick up a coin and move in a certain direction. There was an ancient stone fish pond/tank found near the docks of Capernaum (Greek Orthodox) by archaeologists. The tilapia (St. Peter's fish) is known to carry its small young in its mouth until they were large enough to leave. There are reports of the fish picking up small pebbles in its mouth. There was a story written about a tilapia being found with a bottle cap in its mouth. St. Peter's fish is a popular menu item in restaurants around the lake.

During January in Tiberias, the people of Tiberius were using rods and reels with treble hooks at the ends of their lines to snag the tilapia. In 1909 a traveler reported he had seen fishing done with a string of hooks tied to a line with a weight at the end of it and pulled rapidly through the water in order to catch the fish by impaling them. The fish usually doesn't take live bait as it is a plankton feeder. I met a fisherman who told me he caught one using a fly

The temple taxes were collected in the month before Passover as the lake water got warmer; that was late February - mid March. The time of temple tax collection was recorded in the Talmud tractate Shekalim. About this time there might have been some tilapia zilli fish moving gravel on the bottom to build spawning pits, others might have been searching for plant material on the bottom as one species not only ate plankton material, but pieces of aquatic plants too. This species is a probable St. Peter's fish. It was occasionally omnivorous and might have seen a shiny object and gone to investigate.

According to C. Serrya, Lake Kinnereth, there are six species of mouth breeders (tilapia) in the lake mainly plankton eaters, but two are omnivorous including tristramella sacra; a relatively large species. Spawning pits were excavated by these fish. A fish opened its mouth and swam along the bottom filling its mouth with sediment then spit it out at the end of its row, and swam backwards to start the process again. The fish guarded their nests during this process. The spawning usually happened according to water temperatures. Near the warm springs of Tabgha the spawning might have been early. The tilapia spawned when the water was warm enough. Authors reported large schools of tilapia swarming near the warm springs that flow into the lake at Tabgha two miles west of Capernaum. A fisherman from En Gev told me that during the early days of the fishing kibbutz there were fights between Orthodox fishermen over the right to fish near Capernaum. The region of Bethsaida near the mouth of the Jordan was where fishermen went to catch Kinnereth sardines. 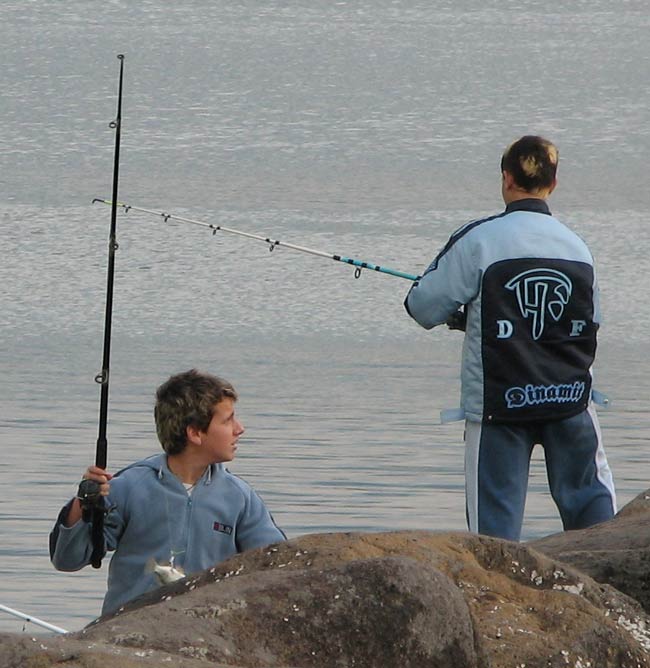 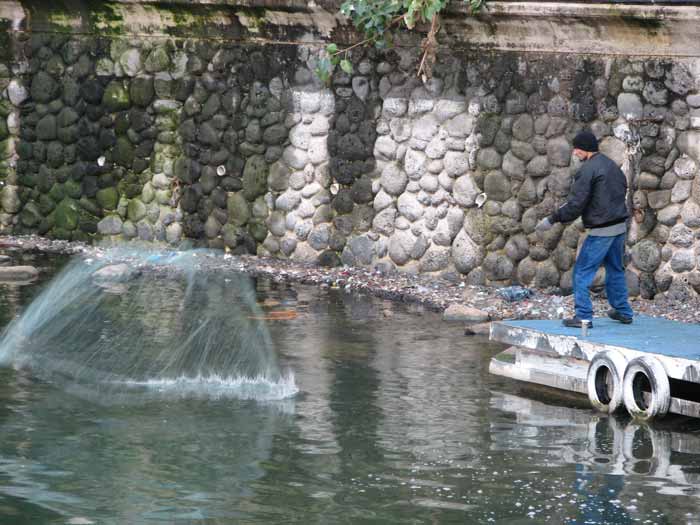 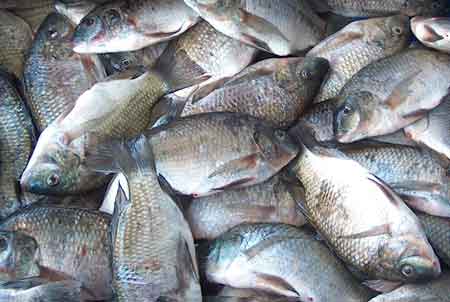 I was asking the fish vendors if these were St. Peter's Fish, they answered, "Yes". In 1936 H.V. Morton reported time spent fishing and visiting fishermen on the lake. He reported he found the legendary "St. Peter's fish," a musht (tilapia) and opened its mouth. The mouth opens very wide as the fish sheltered its young inside the mouth. He took out a ten piastre coin and placed it in the fish's mouth. It fit.

In the 11/12 1993 issue of Biblical Archaeology Review, a Galilean fisherman named Mendel Nun wrote that the St. Peter's fish also known as musht fed on plankton.  He thought the Biblical St. Peter's fish was the barbel, similar to a carp. The carp in the lake were introduced in more recent times, yet authorities at the Ein Gev, House of Anchors Galilee Fishing History Museum determined the barbel has been in the lake since ancient times. This was also published in Mendel Nun's book. The barbel is a bottom feeding fish that might have been attracted to shiny objects as small fish were shiny. Mendell wrote that this fish searched the bottom sediments for water snails and scavenged for dead fish.

It had been observed that a bluegill fish in an Indiana lake struck at a lure during its nest building, as if it were defending its nest or territory, not because it was hungry. A fish not normally feeding on bait might consider it a threat during the time of its egg laying and strike at it. A species of tilapia of Galilee deposited the eggs and then the female was described as picking them up and carrying them in her mouth until they hatched and then sheltered the little fish in spaces in its mouth and as far as its gills.

During July 2006 I saw people fishing at the Tiberias Marina using bread as bait. Some larger fish occasionally came in to try to feed on the bread. The fish were skilled at bumping the bread off the line without getting caught. Occasionally one got caught during a feeding frenzy. Sometimes larger fish took pieces of bread thrown to them, they were shaped like a tilapiine fish, yet a positive identification of the species was not certain. 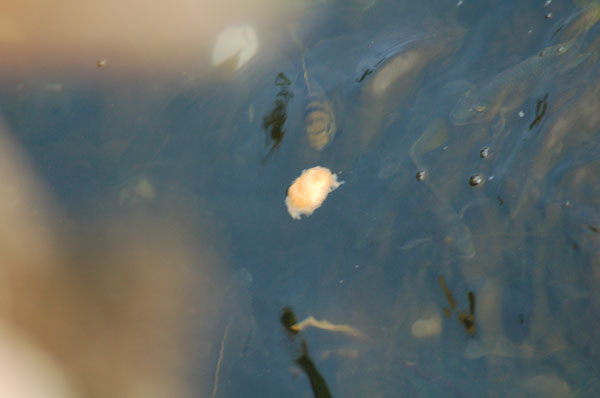 July 2006 -- Fish feeding on bread at Tiberius; the stripped fish is a different species than St. Peter's fish. Tilapia grown in fish ponds were fed grain as food.

A literal translation of the Gospel of Matthew indicated the coin from the fish's mouth was a four drachma coin. A drachma was a little heavier than a denarius. A Tyrian shekel was a Roman provincial coin worth four drachmas or one Jewish shekel. The Jewish temple half-shekel tax was collected from the different districts of Israel once a year. Jews from outside of Israel brought coins for their religious taxes dues during their pilgrimages to the temple. It was not permitted to pay this Jewish tax with coins having images of the emperor on them. The dislike of images by the people was required by the Hebrew books of Moses (Torah). There were also Greek four drachma (tetradrachma) silver coins. These were from the times of Greek occupation of Galilee and were stamped with various rulers' portraits. Money changers in the temple converted the coins of the foreign currency to the approved priestly coinage. Caesar Augustus (31 BC - 14 AD) minted a silver tetradrachma. 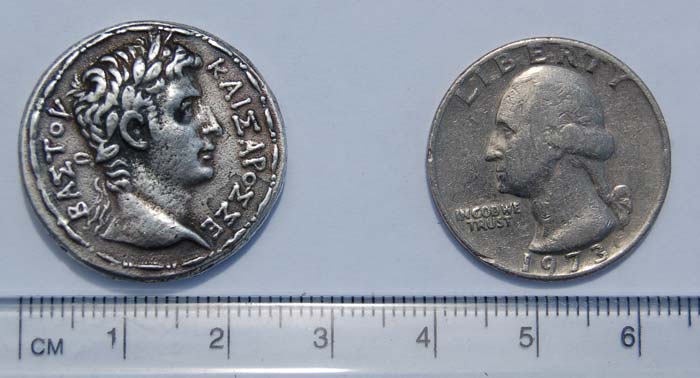 The photo above shows an Augustus tetradrachma beside a US quarter. The coin is about an inch in diameter and worth four shekels; the cost of the annual temple tax for two people.

The Shekalim tractate of the Jerusalem Talmud contained descriptions of the temple tax. It was due by the 15 of Adar, about a month before the Passover was sacrificed on the 14th of Nissan. The first day of eating the unleavened bread was on the 15th of Nissan.

There is a free version of the Babylonian Talmud and the first page of Shekalim online at: http://www.sacred-texts.com/jud/t02/shk05.htm#page_1