Caves along a ridge to the east of Kursi. 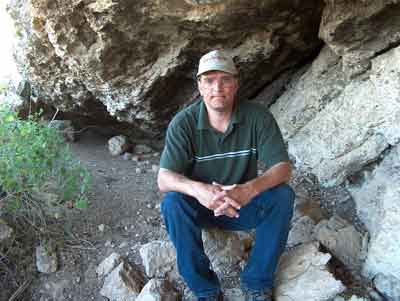 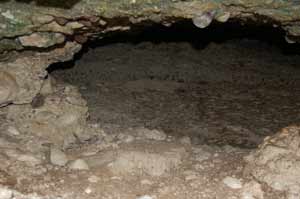 I picked up a Franciscan guidebook in a Jerusalem guesthouse library and found mention of recesses in the wadi to the side of the Kursi monastery described as tombs. The study of this area has occurred to try to determine the geographical context of the Gospels and the story about the demoniac. The demoniac was described as a Gerasene in two of the early Gospels, a Gergesene in later manuscripts, and a Gadarene in one of the Gospels. There were limestone cave/overhanging ledges and manmade conglomerate caves along this coast. The rock was solid and the caves might have been hundreds or thousands of years old. They may have been dug into conglomerate,the rock is cemented solid, a rock strata dipping to the west.

There was also a steep slope and numerous caves/tombs in the NW corner of the lake near Magdala and Hawaii Beach.

In 2006 I found a book by W. Sanday, SACRED SITES OF THE GOSPELS, Oxford at the Clarendon Press, 1903. Sanday went to Kursi although the Arabs called it Kersa at that time. Sanday reported seeing tombs and a steep place almost at the edge of the lake. He compared the word Kersa to Geresa.

Sanday quoted the work of one Dr. Thomson, THE LAND AND THE BOOK (1901), who was credited with having discovered the place. Thomson wrote: "The name of this prostrate town is Kerza (sic) or Gersa as my Bedawin guide shouted it in my ear the first time I visited it, on that windy day we have been describing. The name however pronounced by Bedawin Arabs, is so similar to Gergesa, that to all my inquiries for this place, they invariably said it was at Chersa (sic); and they insisted that they were identical, and I agreed with them in this opinion."

Sanday reprinted the work of Dr. K. Furrer, of Zurich: "That Kersa (the first discoverer of the place, Thomson, writes Gersa, Schumacher Kursi) may, so far as the sounds are concerned, be identified with Gerasa ... That there was a place Gerasa (Origen thought that it should be written Gergesa) on the eastern shore of the lake was known only to Origen, who on his repeated journeys to Bostra may have been acquainted with this district ... also Burchardus (1283) who remarks: Gerasa civitas in littore maris sita Galilee, sub monte Seyr (by which he means the Golan)."

Whether or not this place was named Gerasa in the time of Christ may not be proven. The Gospels only stated this man was from a place, not that he was or wasn't found in the place he was from. The demoniac was sleeping in tomb(s) as he had no home. An insane man with a criminal record sometimes wandered because as soon as his reputation became known he was no longer welcomed. People may have offered him temporary assistance, but after he showed them scorn and abuse, would have wished he depart and not offer him assistance, but instead threats of chains and imprisonment.

Gerasa of the Decapolis, Jerash c. 1900 -- Library of Congress collection

This was another place Gerasa/Jerash, a city of the Decapolis about 30 miles south-east of the Sea of Galilee.