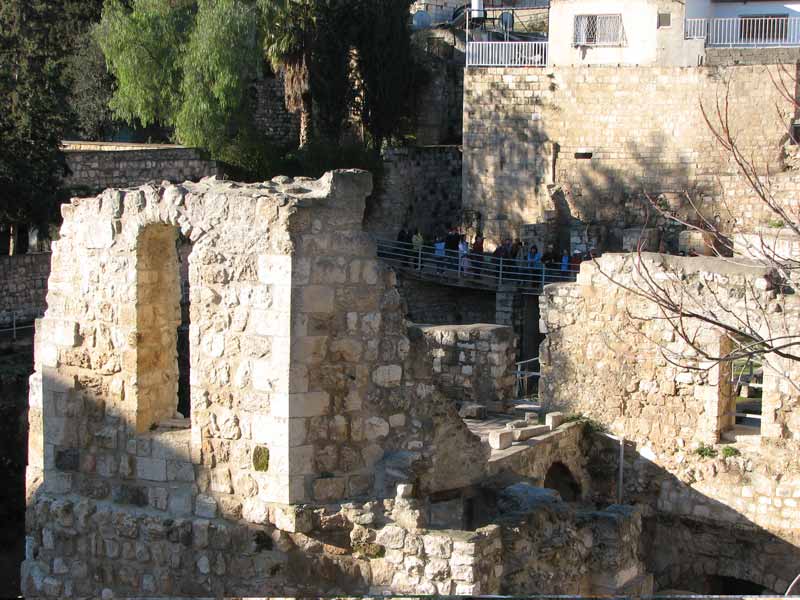 Photo of a Crusader Chapel built between the North and South Pools with Healing Pools to the East.

Inside St. Stephen's Gate of Jerusalem (Lion's Gate) is St. Ann Church. On the property of the church are the ruins of the pools of Bethesda that were described in the Gospel According to John where Jesus healed a paralytic who was 38 years old.

Archaeologists uncovered the main pool (Southern Pool) identified by some as the location of the healing, yet more importantly they uncovered a series of medicinal baths at the east end of the complex indicating the place was associated with healing The medicinal pools and baths were built from 150 BC to 70 AD according to the tourist pamphlet given at the entrance. These were likely used as mikvehs (small cleansing pools) for Jewish ritual purification. The small pools were to the east of the main pools. There were two large rectangular pools identified as the north and south pools separated by an island in between. This area was probably the location of the five porticoes.

Bethesda may be from Hebrew meaning "House of Mercy"; listed as Beth Hasa or Beth Hesed by various authors. Bethzatha is Greek for the hill in the NE section of the city that is thought to have been outside the second city wall (outermost wall of Jerusalem) in existence during the time of Jesus ministry to Jerusalem. The location of this wall was described by the Roman historian Flavius Josephus.

Bethesda was near the Sheep Gate and area outside the wall in an area known as the "New City" that was later enclosed by the third wall.  This area is near the modern gate of the old city called St. Stephen's Gate by Christians.  This gate faces the Mt. of Olives. 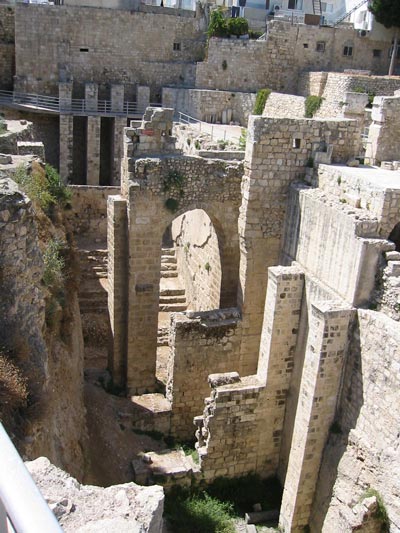 There were two main pools at Bethesda. There is a northern pool and a southern pool with an island in the middle. There were five porticoes. The pool was in use from 150 BC to 70 AD. A Byzantine patriarch renovated the area of the pool during the 5th century AD. Either the southern, northern, or a "healing pool" also on the property is the probabe site of Jesus healing the paralytic.