THE POOL OF SILOAM AT JERUSALEM 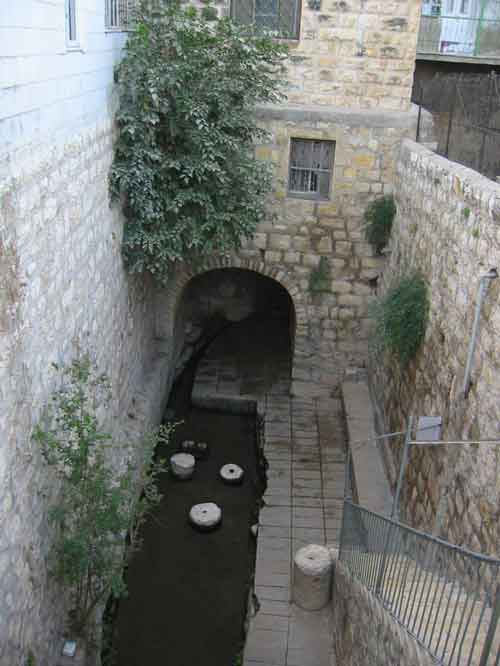 According to the apostle John, Jesus sent a blind man to the pool of Siloam with instructions to wash his eyes with water. Upon completing Jesus' instructions the man was healed. In the book of 2 Kings 20 Hezekiah King of Judah was credited with building a tunnel from the Gihon spring near a fortification wall of the city to within the city. Siloam is near the intersection of the Kidron, Hinom, and Tyropean Valleys at the southern and lower end of the City of David along the Ophel Ridge.

There was also a lower pool below the Byzantine Siloam that was used during Roman times. During 2005 a construction crew was repairing a drain line in this area and uncovered some stone steps. Since then part of the pool has been revealed at the north end of a sunken garden. Years ago I had seen one archaeologist described this area as the "lower pool", but had not called it the pool of Siloam mentioned in the Bible. Now it is believed to be the Roman era Pool of Siloam.

Roman era Pool of Siloam excavation looking towards Silwan in the east, January 20, 2006

John 9:1 (WEB) As he passed by, he saw a man blind from birth. 2 His disciples asked him, “Rabbi, who sinned, this man or his parents, that he was born blind?” 3 Jesus answered, “Neither did this man sin, nor his parents; but, that the works of God might be revealed in him. 4 I must work the works of him who sent me, while it is day. The night is coming, when no one can work. 5 While I am in the world, I am the light of the world.” 6 When he had said this, he spat on the ground, made mud with the saliva, anointed the blind man’s eyes with the mud, 7 and said to him, “Go, wash in the pool of Siloam” (which means “Sent”). So he went away, washed, and came back seeing.

According to Josephus the first century Roman wall of Jerusalem turned from N-S to E-W above Siloam. Siloam was in the photo below the blue arrow. The Roman wall turned close to the pool. This area was relatively flat and the towers and wall in this area were probably about 35 feet high as Josephus explained the old wall had 60 towers 20 cubits high along the 20 cubit high wall; with turrets and battlements the entire height was recorded as 25 cubits (Josephus War Book V Chapter IV).