A shepherd is a common sight in the hills around Jerusalem. 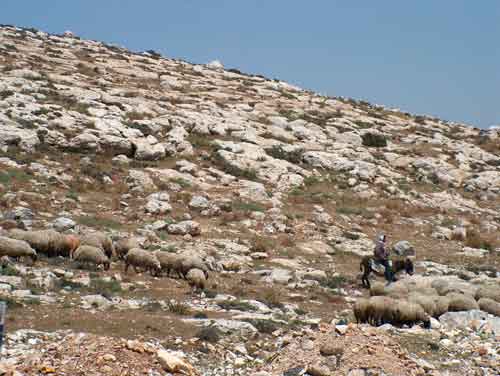 JESUS AS THE GOOD SHEPHERD

1 “Most certainly, I tell you, one who doesn’t enter by the door into the sheep fold, but climbs up some other way, the same is a thief and a robber. 2 But one who enters in by the door is the shepherd of the sheep. 3 The gatekeeper opens the gate for him, and the sheep listen to his voice. He calls his own sheep by name, and leads them out. 4 Whenever he brings out his own sheep, he goes before them, and the sheep follow him, for they know his voice. 5 They will by no means follow a stranger, but will flee from him; for they don’t know the voice of strangers.” 6 Jesus spoke this parable to them, but they didn’t understand what he was telling them. 7 Jesus therefore said to them again, “Most certainly, I tell you, I am the sheep’s door. 8 All who came before me are thieves and robbers, but the sheep didn’t listen to them. 9 I am the door. If anyone enters in by me, he will be saved, and will go in and go out, and will find pasture. 10 The thief only comes to steal, kill, and destroy. I came that they may have life, and may have it abundantly. 11 I am the good shepherd. The good shepherd lays down his life for the sheep. 12 He who is a hired hand, and not a shepherd, who doesn’t own the sheep, sees the wolf coming, leaves the sheep, and flees. The wolf snatches the sheep, and scatters them. 13 The hired hand flees because he is a hired hand, and doesn’t care for the sheep. 14 I am the good shepherd. I know my own, and I’m known by my own; 15 even as the Father knows me, and I know the Father. I lay down my life for the sheep. 16 I have other sheep, which are not of this fold. I must bring them also, and they will hear my voice. They will become one flock with one shepherd. 17 Therefore the Father loves me, because I lay down my life, that I may take it again. 18 No one takes it away from me, but I lay it down by myself. I have power to lay it down, and I have power to take it again. I received this commandment from my Father.”

1 Yahweh’s word came to me, saying, 2 Son of man, prophesy against the shepherds of Israel, prophesy, and tell them, even to the shepherds, Thus says the Lord Yahweh: Woe to the shepherds of Israel who feed themselves! Shouldn’t the shepherds feed the sheep? 3 You eat the fat, and you clothe yourself with the wool, you kill the fatlings; but you don’t feed the sheep. 4 You haven’t strengthened the diseased, neither have you healed that which was sick, neither have you bound up that which was broken, neither have you brought back that which was driven away, neither have you sought that which was lost; but with force and with rigor you have ruled over them. 5 They were scattered, because there was no shepherd; and they became food to all the animals of the field, and were scattered. 6 My sheep wandered through all the mountains, and on every high hill: yes, my sheep were scattered on all the surface of the earth; and there was no one who searched or sought. 7 Therefore, you shepherds, hear Yahweh’s word: 8 As I live, says the Lord Yahweh, surely because my sheep became a prey, and my sheep became food to all the animals of the field, because there was no shepherd, neither did my shepherds search for my sheep, but the shepherds fed themselves, and didn’t feed my sheep; 9 therefore, you shepherds, hear Yahweh’s word: 10 Thus says the Lord Yahweh: Behold, I am against the shepherds; and I will require my sheep at their hand, and cause them to cease from feeding the sheep; neither shall the shepherds feed themselves any more; and I will deliver my sheep from their mouth, that they may not be food for them.

14 If you are insulted for the name of Christ, you are blessed; because the Spirit of glory and of God rests on you. On their part he is blasphemed, but on your part he is glorified. 15 For let none of you suffer as a murderer, or a thief, or an evil doer, or a meddler in other men’s matters. 16 But if one of you suffers for being a Christian, let him not be ashamed; but let him glorify God in this matter. 17 For the time has come for judgment to begin with the household of God. If it begins first with us, what will happen to those who don’t obey the Good News of God? 18 “If it is hard for the righteous to be saved, what will happen to the ungodly and the sinner?” 19 Therefore let them also who suffer according to the will of God in doing good entrust their souls to him, as to a faithful Creator.

I exhort the elders among you, as a fellow elder, and a witness of the sufferings of Christ, and who will also share in the glory that will be revealed. 2 Shepherd the flock of God which is among you, exercising the oversight, not under compulsion, but voluntarily, not for dishonest gain, but willingly; 3 neither as lording it over those entrusted to you, but making yourselves examples to the flock. 4 When the chief Shepherd is revealed, you will receive the crown of glory that doesn’t fade away. 5 Likewise, you younger ones, be subject to the elder. Yes, all of you clothe yourselves with humility, to subject yourselves to one another; for “God resists the proud, but gives grace to the humble.” 6 Humble yourselves therefore under the mighty hand of God, that he may exalt you in due time; 7 casting all your worries on him, because he cares for you. Be sober and self-controlled. Be watchful. Your adversary, the devil, walks around like a roaring lion, seeking whom he may devour. 9 Withstand him steadfast in your faith, knowing that your brothers who are in the world are undergoing the same sufferings. 10 But may the God of all grace, who called you to his eternal glory by Christ Jesus, after you have suffered a little while, perfect, establish, strengthen, and settle you. 11 To him be the glory and the power forever and ever. Amen.