THE OLIVE HARVEST AT SAMARIA 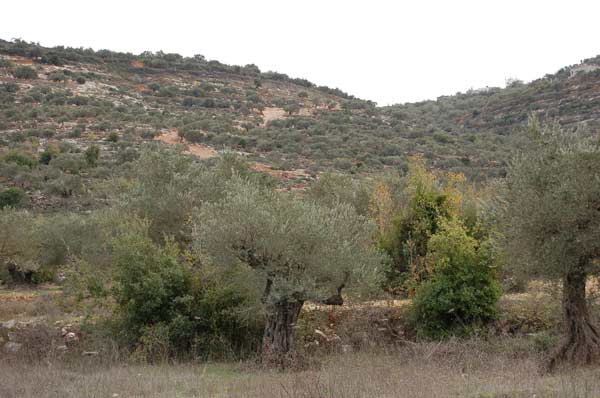 Jesus At A Well Near Shechem

In the Gospel of John, Jesus was going from Judea in the south toward Galilee in the north. He was passing through Samaria at Sychar (Shechem). Jesus met a woman by Jacob's well and talked to her while his disciples went into town to buy food. While conversing, Jesus told the woman she had five husbands and the one she was currently going with was not her husband. The woman had never met Jesus before and concluded he was prophesying.

John 4:28 (WEB) So the woman left her water pot, went away into the city, and said to the people, 29 Come, see a man who told me everything that I did. Can this be the Christ?

30 They went out of the city, and were coming to him. 31 In the meanwhile, the disciples urged him, saying, Rabbi, eat.

32 But he said to them, I have food to eat that you don't know about.

33 The disciples therefore said to one another, Has anyone brought him something to eat?

34 Jesus said to them, My food is to do the will of him who sent me and to accomplish his work. 35 Don't you say, There are yet four months until the harvest? Behold, I tell you, lift up your eyes and look at the fields, that they are white for harvest already. 36 He who reaps receives wages and gathers fruit to eternal life; that both he who sows and he who reaps may rejoice together. 37 For in this the saying is true, One sows, and another reaps. 38 I sent you to reap that for which you haven't labored. Others have labored, and you have entered into their labor.

39 From that city many of the Samaritans believed in him because of the word of the woman, who testified, He told me everything that I did.

Jesus was speaking to the residents of Shechem who had a saying; four months and then the harvest. He said the fields were already white for harvest. Barley or wheat starts out green then turns tan white as it ripens. It must then dry awhile before it is harvested. The barley was ready for harvest four months after it was planted.

At one time I presumed Jesus was going from Jerusalem to Galilee after the Passover and it was probably at least April by the time he got there. Four months later the olive harvest might begin. They picked the green olives first to make virgin olive oil as early as September and picked the darker salad olives in October or November. There are many olive trees in Samaria as the region is hilly and mountainous.

Jesus had his disciples with him, so his visiting the woman in Samaria happened after he called his disciples. The Gospels are not always in chronological order, but sometimes the events and speeches were written outside of chronological order. The account of Jesus driving the merchants out of the temple was near the beginning of the Gospel of John, but near the end of the other Gospels. I think there was only one time Jesus drove the sellers of sacrificial animals and money changers out of the temple. That was during his last days in Jerusalem

Jesus emphasized there was work to be done that day. God has all sorts of work available. Jesus was teaching people the word of God. Fields are ready for the harvest today. I have not figured out the exact time Jesus was visting the Samaritan woman at Jacob's well in Samaria.