A WATCHTOWER IN AN OLIVE GROVE / VINEYARD 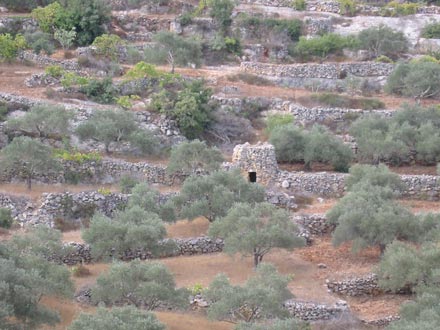 A watchtower in an olive grove near Lower Beth Horan (Sept. 2003)

In the limestone hill country north of Jerusalem the people built terraces and planted olive trees. Vines were planted and supported by the stone walls. They appear as light green on the limestone walls. The watchtower was used for security purposes. In 2006 I toured the West Bank along Rte. 60 north of Ramallah near Ofra and found numerous watchtowers. 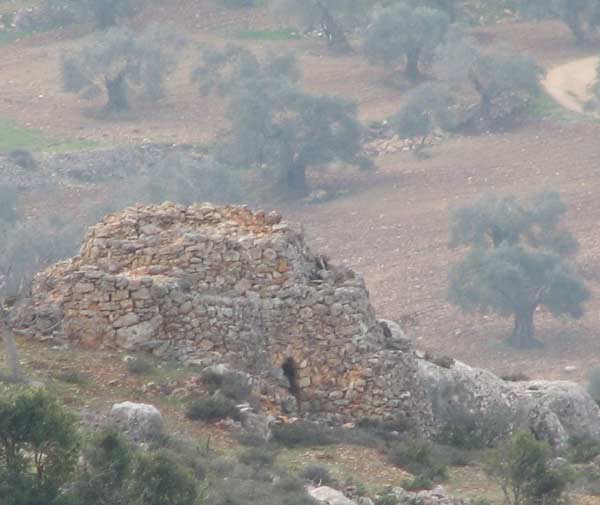 Israel once tended many vineyards. Currently some wine is produced in the north of Israel, but there is not as much wine industry in the West Bank as the area is primarily Muslim and they do not allow the consumption of alcohol. As late as the Byzantine era there were numerous vines, wine amphorae, and grapes represented by artwork found at ancient sites.

Parable of the Vineyard Owner

Matthew 21:33 “Hear another parable. There was a man who was a master of a household, who planted a vineyard, set a hedge about it, dug a wine press in it, built a tower, leased it out to farmers, and went into another country. 34 When the season for the fruit came near, he sent his servants to the farmers, to receive his fruit. 35 The farmers took his servants, beat one, killed another, and stoned another. 36 Again, he sent other servants more than the first: and they treated them the same way. 37 But afterward he sent to them his son, saying, ‘They will respect my son.’ 38 But the farmers, when they saw the son, said among themselves, ‘This is the heir. Come, let’s kill him, and seize his inheritance.’ 39 So they took him, and threw him out of the vineyard, and killed him. 40 When therefore the lord of the vineyard comes, what will he do to those farmers?” 41 They told him, “He will miserably destroy those miserable men, and will lease out the vineyard to other farmers, who will give him the fruit in its season.” 42 Jesus said to them, “Did you never read in the Scriptures, ‘The stone which the builders rejected, the same was made the head of the corner. This was from the Lord. It is marvelous in our eyes?’ 43 “Therefore I tell you, God’s Kingdom will be taken away from you, and will be given to a nation producing its fruit.

From the Book: Peeps at Many Lands, The Holy Land, by John Finnemore (1863-1915), London, 1908: "The grape harvest took place in Sept. and Oct. As the grapes ripened there were thieves who tried to help themselves to the sweet fruits of the vine keeper's labors: "Watch must be kept for thieves, who climb the walls at night to steal the precious bunches, and watch must be kept for animals, which will do terrible mischief among the vines if once they break into the vineyard. Wolves, bears, jackals, foxes, and the village dogs all are very fond of grapes and some of them are very nimble and not easy to keep out. As the vintage time draws near, the keeper of the vineyard gathers a great store of thorn-bushes and lays them along the top of the walls. The thorns project beyond the wall, and the bushes are weighted with stones to keep them in place. This prevents animals from getting in and stealing the grapes."

More vineyard text: "The vineyard supplies fresh fruit, raisins, and wine. The fresh grapes are eaten in great quantities during their season, the months of September and October, and still greater quantities are dried for the winter’s store. In a warm, open spot in the vineyard a smooth floor is prepared, and here bunches of grapes are spread out to dry. The bunches are frequently turned, and are sprinkled with olive oil to keep the skin moist. If the weather is hot and dry the grapes become raisins about a fortnight, but unfavourable weather, cloudy or misty, prolongs the time required, and the raisins are not so well flavoured, and are of darker colour. When the raisins are ready, the women store them carefully in the earthen bins, and they form a valuable part of the food-supply of the year."

From The Geography of Bible Lands, Crosby, 1921: "The grape season lasts from late July to November or December. During this time whole families go to live in the vineyards. In some parts of the country a traveler in passing a vineyard may eat all the fruit he wishes, but must not carry any away. In the Ram Allah district, which is one of the more prosperous regions, German contractors furnish wooden boxes for the grapes, which are picked and packed by women and girls whose daily wage is from seven to twelve cents. Camels transport the boxes of grapes to Joppa. The fruit is picked early to save the strength of the vines and to prevent waste. After the harvest the vines are pruned and the ground is plowed. It is cultivated again in winter. In some sections the sheep and goats are turned in to eat the leaves of the vines, much as flocks feed in our grain fields after harvest."

Varro (116 BC – 27 BC) in Rerum Rusticarum Libri Tres; wrote it was necessary for a farmer to fence his vineyard to keep goats out as they were known to destroy the vines. Varro also listed mice and foxes as a threat to the vineyard as they ate grapes.