The camel above has its legs tied to prevent it from running away. 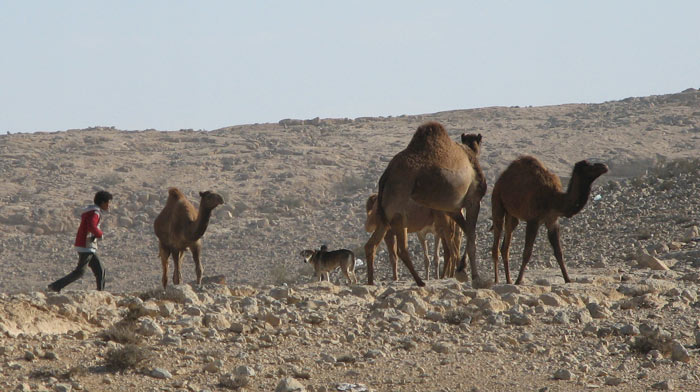 Isaiah 60:6 (WEB) A multitude of camels will cover you, the dromedaries of Midian and Ephah. All from Sheba will come. They will bring gold and frankincense, and will proclaim the praises of Yahweh.

A camel was able to carry three hundred pounds and go days without water. The camel gave milk to her herders. One camel was able to go ten days without drinking. During the days of Jesus, the Nabateans of the desert used camel caravans to gain wealth by trading. Nabatean caravans may have transported incense, spice, pearls, and gold from Arabia in the south to Petra, Gaza, Damascus, Palmyra, Babylonia and parts in between.

While in Jerusalem, Jesus was rebuking some of the religious teachers of his day: Matthew 23:24 (WEB) You blind guides, who strain out a gnat, and swallow a camel!

The passage above seems like a description of someone straining a gnat out of water before drinking it, then erring in eating a whole camel like a glutton. There is some probability the original text might have been "you strain out a gnat, but swallow like a camel(?)." Jews were not allowed to eat camels and Jesus' audience was usually Jewish. By Jewish law camel meat is unclean as it does not have a split hoof even though it "chews the cud" (Leviticus 11:1-8). It was not kosher to "swallow a camel." Drinking too much water may lead to blindness or death. Under normal circumstances one should not guzzle like a thirsty camel filling up after being without a drink in a week. A no salt added or low sodium diet may reduce excessive thirst.

Matthew 19:24 (World English Bible): Again I tell you, it is easier for a camel to go through a needle’s eye, than for a rich man to enter into God’s Kingdom.” 25 When the disciples heard it, they were exceedingly astonished, saying, “Who then can be saved?”

An ancient Greek word for camel is kamelos. In one text an ancient Syriac/Semitic word for rope was kamilos and was translated into Greek as kamelos (camel). Some people would rather like to substitute the word rope in this parable such as, "It is easier to thread a rope through the eye of a needle than for a rich man to enter the kingdom of heaven."