VIEW FROM BELOW THE SUMMIT OF THE MT. NAZARETH, ISRAEL 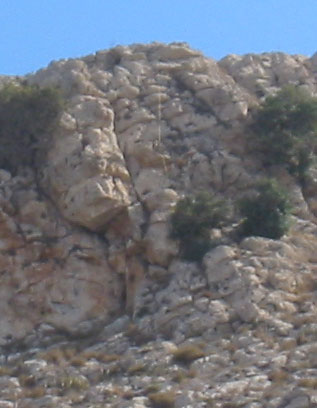 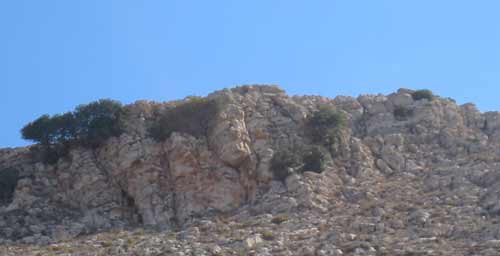 I bought a yellow 20 meter clothesline at a grocery store and then went to the summit. I tied a plastic Coke bottle filled with sand to the end of the line and dropped it over the edge. At about 50 feet it stopped. I pulled it up and dropped it and it went down until the entire 65 feet of the line was out and the line slack was gone. I went down to view the line and found it was dropped into a crevice down the cliff face, I was unable to retrieve it from the crevice as the bottle was wedged into the crack and it was anchored there permanently. This mountain has a large cave in it near its base. Another line colored blue was dropped the next day slightly to the left of the first location and there it was about 52 feet (20 meters = 65.62 feet) to the base of the vertical drop.  This was done with a blue clothesline that blended in with the limestone cliffs in the early morning. There was another cliff that seemed steeper on the same mountain, but I was not able to measure it due to lack of time.

Another year I learned there was another mountain near the western edge of Nazareth below this one that might also have been the Mt. of Precipice as shown on previous pages.