In the early fourth century Eusebius published his Onomasticon - an atlas of Biblical locations in Israel. In this book he described Chorazein as two mile posts from Capernaum. In his time, before his death c. 339-340, it was deserted. A Roman mile is about 5241.47 feet.

Korazim Park is about 4 kilometers from Capernaum (according to map). There was a sign at the Korazim National Park "...site was probably settled during the 1st century CE." At Korazim/Chorazin I met a local couple picking up pieces of red clay pottery after a rain storm who told me the town could be dated to early Roman times. I told them there appeared to be some old foundations in the pasture below the park. He told me there are more ruins further up the hill behind park.

In 2007 Henry B. Smith, M.A., Associates for Biblical Research, published an online article about Chorazin showing a map with first century ruins on a hill north of the Chorazin parking lot.

In September of 2020 a YouTube video about the lifting of the third century synagogue floor by Israeli archaeologist Achia Cohen Tavor and the discovery of first century pottery beneath it was published by Sergio and Rhoda of Israel: Lifting the ancient floor of the cursed city of Chorazin 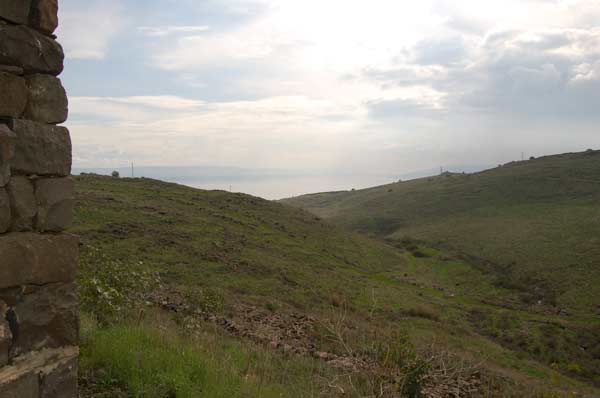 Chorazin, Bethsaida, and Capernaum were but piles of buildings stones when 19th century travelers reached these sites. One traveler remarked that Capernaum had been cast down just as Jesus predicted as he looked at the piles of stones in front of him at Tel Hum (Capernaum). There were numerous wars and devastating earthquakes in the area. Tiberias and Safed have been rebuilt after the earthquake of 1837 caused buildings to collapse on top of those dwelling within.

According to park authorities this synagogue was built in the third or fourth century. Jesus did not indicate there was a synagogue at first century Chorazin. This location was referred to as Choriza by Arabs before Israeli statehood in 1948.

Aerial View From A Nearby Hilltop 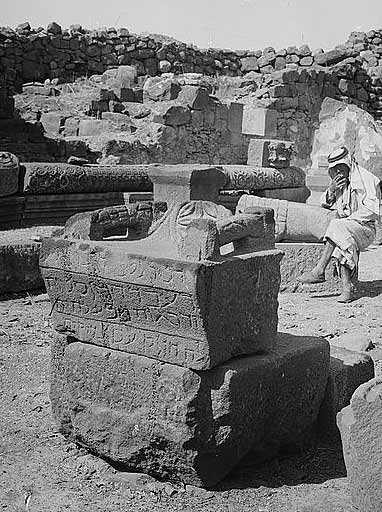 The ruler of the synagogue may have sat in this seat, referred to as the seat of Moses. The seat found at Chorizin is in the Israel Museum and a replica was placed at the Korazim National Park. A similar stone seat of Moses was found in an early synagogue on the island of Delos in Greece. There was also a Moses seat found at Hammath Tiberias near Tiberias on the Sea of Galilee. (Ancient Synagogues in Palestine and Greece, E.L. Sukenik, 1934).

Matthew 23:1-14 (WEB) 1 Then Jesus spoke to the multitudes and to his disciples, 2 saying, “The scribes and the Pharisees sat on Moses’ seat. 3 All things therefore whatever they tell you to observe, observe and do, but don’t do their works; for they say, and don’t do. 4 For they bind heavy burdens that are grievous to be borne, and lay them on men’s shoulders; but they themselves will not lift a finger to help them. 5 But all their works they do to be seen by men. They make their phylacteries[a] broad, enlarge the fringes[b] of their garments, 6 and love the place of honor at feasts, the best seats in the synagogues, 7 the salutations in the marketplaces, and to be called ‘Rabbi, Rabbi’ by men. 8 But don’t you be called ‘Rabbi,’ for one is your teacher, the Christ, and all of you are brothers. 9 Call no man on the earth your father, for one is your Father, he who is in heaven. 10 Neither be called masters, for one is your master, the Christ. 11 But he who is greatest among you will be your servant. 12 Whoever exalts himself will be humbled, and whoever humbles himself will be exalted. 13 “Woe to you, scribes and Pharisees, hypocrites! For you devour widows’ houses, and as a pretense you make long prayers. Therefore you will receive greater condemnation. 14 “But woe to you, scribes and Pharisees, hypocrites! Because you shut up the Kingdom of Heaven against men; for you don’t enter in yourselves, neither do you allow those who are entering in to enter.