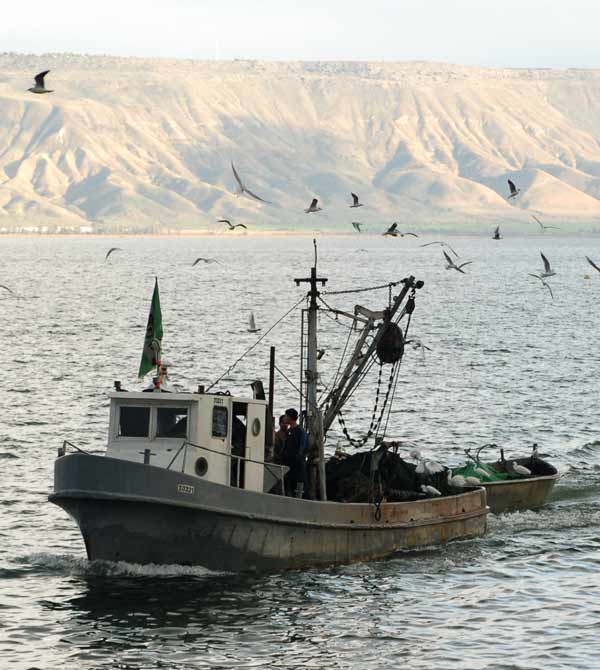 These boats were used by fisherman who fished at night.

I was able to find a boat and fishing crew setting out as the last light of day was fading from the sky.

Fishing crew returning from fishing early in the morning, January 2006

Jesus attracted a following as a result of his teaching. Four fishermen named Peter, Andrew, James and John followed him. Once Peter was fishing all night with his crew and caught nothing. God intervened and Jesus told them to let down there nets to try again. Peter and crew hauled in a large catch as a result of following his advice. Another time Jesus taught that one who has begun to plow should plow and not look back. This is not to exalt idle folly. The work was hard, but worse circumstances arose from not working at all.

Jesus also taught a tax collector named Matthew. Tax collectors were amongst the wealthy of their day. A member of the Jewish Grand Sanhedrin in Jerusalem named Nicodemus followed Jesus. Joanna the wife of Chuza, King Herod's steward supported Jesus. Rabbis during the time of Christ sometimes worked jobs to gain income as the teaching did not pay enough. Jesus and his disciples could not be at their jobs much of the time and accepted some support from the community as Jesus did not charge for his teaching. At times God poured out a blessing upon them such as a boat load of fish or other miraculous provision. People followed Jesus because they saw miracles.

Photo of a man in Joppa mending a fishing net