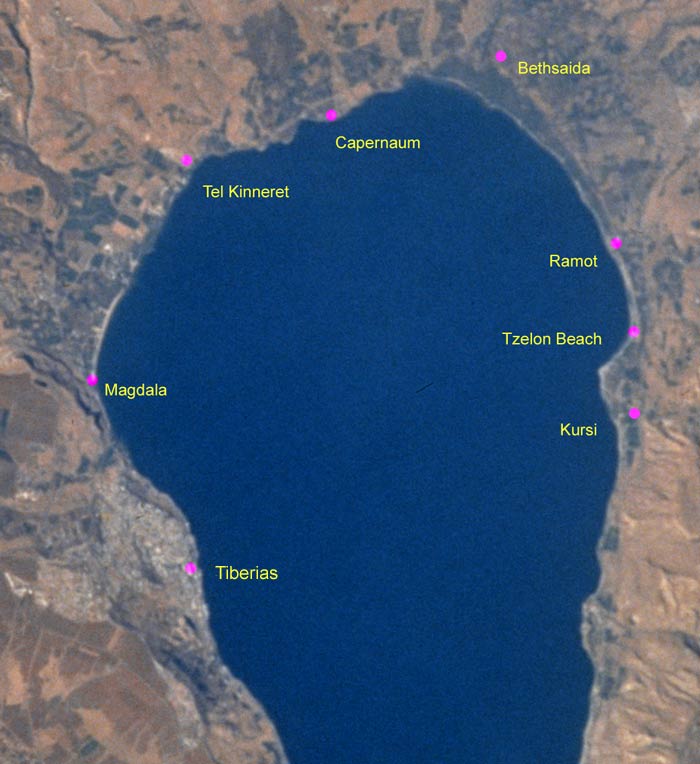 Map Notes: The exact location of Bethsaida is controversial. While Peter and Andrew were fisherman who were from Bethsaida, there was evidence that they were living in Capernaum and used the beach at Capernaum for a landing as it was a few feet from the edge of town. Bethsaida may have been a regional term as well as a town. Old photos and maps show the shoreline was much further inland in previous centuries. The river may have been navigable close to the western edge of Tel Betsaida.

In Matthew 14, after feeding 5000 people, Jesus sent his disciples away by boat and he went up a mountain to pray:
Matthew 14:24-34 (WEB) But the boat was now in the middle of the sea, distressed by the waves, for the wind was contrary. 25 In the fourth watch of the night, Jesus came to them, walking on the sea. 26 When the disciples saw him walking on the sea, they were troubled, saying, “It’s a ghost!” and they cried out for fear. 27 But immediately Jesus spoke to them, saying “Cheer up! It is I![c] Don’t be afraid.” 28 Peter answered him and said, “Lord, if it is you, command me to come to you on the waters.” 29 He said, “Come!” Peter stepped down from the boat, and walked on the waters to come to Jesus. 30 But when he saw that the wind was strong, he was afraid, and beginning to sink, he cried out, saying, “Lord, save me!” 31 Immediately Jesus stretched out his hand, took hold of him, and said to him, “You of little faith, why did you doubt?” 32 When they got up into the boat, the wind ceased. 33 Those who were in the boat came and worshiped him, saying, “You are truly the Son of God!” 34 When they had crossed over, they came to the land of Gennesaret.

Notes: Wind gusting out on the lake, fear of the wind and waves, Peter and Jesus got in the boat the wind stopped, they arrived at Gennesaret "garden of riches". Pliny described the lake by the name Gennesaret (Natural History). Jesus walked to his disciples about the fourth watch of the night. There were four three hour watches. Nine hours of a twelve hour night would have passed

Mark 6:45-56 (WEB) Immediately he made his disciples get into the boat, and to go ahead to the other side, to Bethsaida, while he himself sent the multitude away. 46 After he had taken leave of them, he went up the mountain to pray. 47 When evening had come, the boat was in the middle of the sea, and he was alone on the land. 48 Seeing them distressed in rowing, for the wind was contrary to them, about the fourth watch of the night he came to them, walking on the sea, and he would have passed by them, 49 but they, when they saw him walking on the sea, supposed that it was a ghost, and cried out; 50 for they all saw him, and were troubled. But he immediately spoke with them, and said to them, “Cheer up! It is I! Don’t be afraid.” 51 He got into the boat with them; and the wind ceased, and they were very amazed among themselves, and marveled; 52 for they hadn’t understood about the loaves, but their hearts were hardened. 53 When they had crossed over, they came to land at Gennesaret, and moored to the shore. 54 When they had come out of the boat, immediately the people recognized him, 55 and ran around that whole region, and began to bring those who were sick, on their mats, to where they heard he was. 56 Wherever he entered, into villages, or into cities, or into the country, they laid the sick in the marketplaces, and begged him that they might touch just the fringe of his garment; and as many as touched him were made well.

Notes: After breaking bread Jesus sent his disciples to Bethsaida, and when they crossed over they came to the land of Gennesaret (Gennesaret was beyond Bethsaida to the west). Jesus walked on the water and then they took him into the boat. The wind died down. They quickly arrived in the land of Gennesaret. They were not using sails, but rowing. They were probably going into the wind.

John 6:15 (WEB) Jesus therefore, perceiving that they were about to come and take him by force, to make him king, withdrew again to the mountain by himself. 16 When evening came, his disciples went down to the sea, 17 and they entered into the boat, and were going over the sea to Capernaum. It was now dark, and Jesus had not come to them. 18 The sea was tossed by a great wind blowing. 19 When therefore they had rowed about twenty-five or thirty stadia, they saw Jesus walking on the sea, and drawing near to the boat; and they were afraid. 20 But he said to them, “It is I. Don’t be afraid.” 21 They were willing therefore to receive him into the boat. Immediately the boat was at the land where they were going. 22 On the next day, the multitude that stood on the other side of the sea saw that there was no other boat there, except the one in which his disciples had embarked, and that Jesus hadn’t entered with his disciples into the boat, but his disciples had gone away alone. 23 However boats from Tiberias came near to the place where they ate the bread after the Lord had given thanks. 24 When the multitude therefore saw that Jesus wasn’t there, nor his disciples, they themselves got into the boats, and came to Capernaum, seeking Jesus.

Notes: Jesus sent his disciples to Capernaum. The waves were rising because of the great wind. Jesus walked to them and after they let him climb into the boat the winds were calmed and they reached the shore. Other boats from Tiberius went to the place where Jesus had fed the multitude and then when they got there they found Jesus was gone and went to Capernaum and found him on the other side of the lake. According to the Book of John, Jesus' disciples rowed about twenty-five or thirty stadia

In Matthew the total distance was 9-12 hours as there were twelve hours of night and four three hour watches. John indicated that the wind was causing rising seas about the time of Passover. I assume it was some time before the Passover for they were generally supposed to be in Jerusalem for the Passover as required by Jewish Law. Jesus had sent his disciples to Capernaum after they broke bread and that is where they arrived

The rain storms lasted from November until March in this part of Israel. In January of 2006 I witnessed a thundershower that caused some white caps to rise off the shore of Tiberias. The palm fronds and a flag in Tiberias were blown from the west and pointing east. During much of the year the winds were from the west. Sometimes the storms from the Mediterranean pushed across the lake with violent force. Windmills in the Golan were pointed west to catch these prevailing winds. There were local winds that rushed down the mountain sides abruptly with changes in temperature. There were also the Sharqi winds out of the south-east. These sometimes arrived as early as March or April and were likely to be felt in May. These easterly gusting winds were sometimes reversed by the west winds. One year the east winds of March (1992) sent waves crashing over the roof of the stone masonry Greek monastery between the leaning tower and Russian Pilgrim Center on the shore of the city of Tiberias near the southern end of the marina (Photo in the Ein Gev "House of Anchors" Galilee Fishing Museum).

On December 12, 2010 a storm broke across the Mediterranean creating 30 foot waves at sea. At Tiberias a large window at the Holiday Inn was blown in injuring people inside. Power lines were down. Trees were down. Solar water heaters were knocked off rooftops with 50-110 km/hr winds reported. Eight inches of rain fell within 48 hours and seven feet of snow fell on the upper slopes of Mt. Hermon.

One reason I defended the feeding of the 5,000 on the NE shore theory, from where Jesus walked across the water, was that this event was supposed to have happened shortly after John was beheaded by Herod as reported by John's disciples to Jesus and this NE area near Bethsaida was in Phillip's territory. Herod had taken his brother Phillip's wife and she had ordered John killed for him accusing her of adultery. Some had thought Jesus was a resurrected John the Baptist. The area of Arbel Beach to the NW was a bit too close to Tiberias where Herod had a palace. The place where the feeding took place was supposed to be remote. One of the largest towns on the north shore was Magdala (near Migdal) that was near Arbel Beach. The NE shore near the Decapolis would have been considered a more remote, less settled area as it is to this day.

Luke indicated the feeding happened at Bethsaida. Their regional authority may have extended some distance around the shore to the E - SE.

There was also a feeding of 4,000 mentioned in Mark 8 and Matthew 15. There is a tradition stating this event may have happened at Tel Haddar, a mound of ruins, a few meters from the shore between Ramot and Tzelon