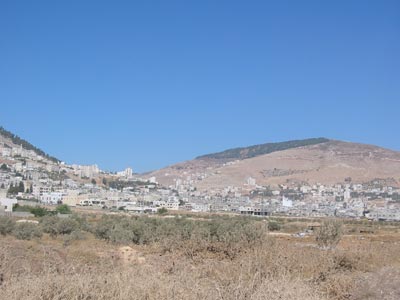 The well at Shechem visited by Jesus (John 4) was in the area between the two mountains in front of the valley that separates the two. On the left is Mt. Gerazim where the Samaritans used to worship. On the right is Mt. Ebal.

Gospel According to John 4:4 He needed to pass through Samaria. 5 So he came to a city of Samaria, called Sychar, near the parcel of ground that Jacob gave to his son, Joseph. 6 Jacob’s well was there. Jesus therefore, being tired from his journey, sat down by the well. It was about the sixth hour. 7 A woman of Samaria came to draw water. Jesus said to her, “Give me a drink.” 8 For his disciples had gone away into the city to buy food. 9 The Samaritan woman therefore said to him, “How is it that you, being a Jew, ask for a drink from me, a Samaritan woman?” (For Jews have no dealings with Samaritans.) 10 Jesus answered her, “If you knew the gift of God, and who it is who says to you, ‘Give me a drink,’ you would have asked him, and he would have given you living water.” 11 The woman said to him, “Sir, you have nothing to draw with, and the well is deep. So where do you get that living water? 12 Are you greater than our father, Jacob, who gave us the well, and drank of it himself, as did his children, and his livestock?” 13 Jesus answered her, “Everyone who drinks of this water will thirst again, 14 but whoever drinks of the water that I will give him will never thirst again; but the water that I will give him will become in him a well of water springing up to eternal life.”

Men were standing around the well and the lady was carrying the water from the well. About 1928 Frederick Niedermeyer of Perth Amboy, NJ published the depth of the well was known to be 79 feet deep, 3 feet wide, perhaps deeper if it is cleaned out. 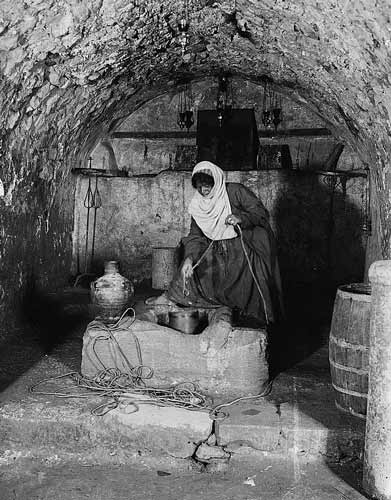 A church was built over this well sometime before 1940. 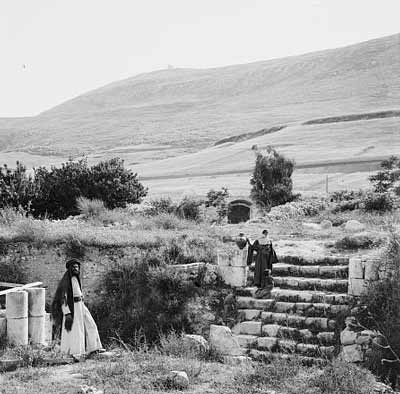