The "Tomb of Mariamne" was thought to be the tomb of Herod's wife whom he killed. There was another theory it is the tomb of a high priest. 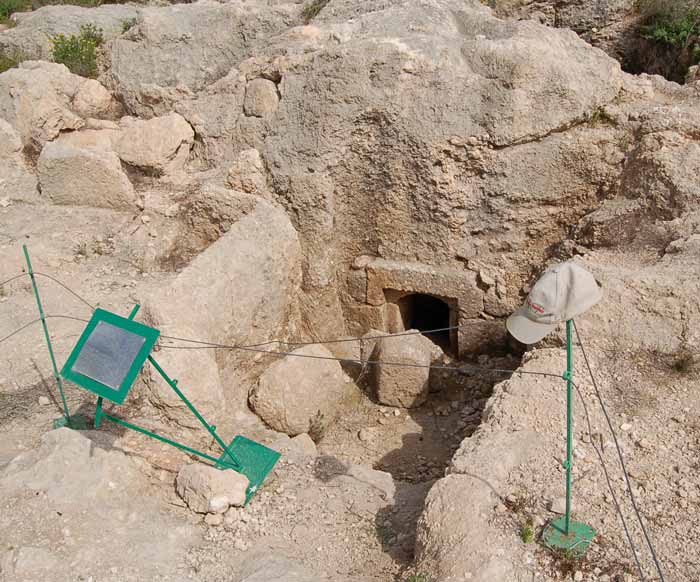 Other rolling stone tombs were discovered at Nazareth, and at Hesban, Jordan.
Photo of the Rolling Stone Tomb at the Sisters of Nazareth Convent, Nazareth

John 11:21 (WEB)  Therefore Martha said to Jesus, “Lord, if you would have been here, my brother wouldn’t have died. 22 Even now I know that, whatever you ask of God, God will give you.” 23 Jesus said to her, “Your brother will rise again.” 24 Martha said to him, “I know that he will rise again in the resurrection at the last day.” 25 Jesus said to her, “I am the resurrection and the life. He who believes in me will still live, even if he dies. 26 Whoever lives and believes in me will never die. Do you believe this?” 27 She said to him, “Yes, Lord. I have come to believe that you are the Christ, God’s Son, he who comes into the world.” 28 When she had said this, she went away, and called Mary, her sister, secretly, saying, “The Teacher is here, and is calling you.” 29 When she heard this, she arose quickly, and went to him. 30 Now Jesus had not yet come into the village, but was in the place where Martha met him. 31 Then the Jews who were with her in the house, and were consoling her, when they saw Mary, that she rose up quickly and went out, followed her, saying, “She is going to the tomb to weep there.” 32 Therefore when Mary came to where Jesus was, and saw him, she fell down at his feet, saying to him, “Lord, if you would have been here, my brother wouldn’t have died.” 33 When Jesus therefore saw her weeping, and the Jews weeping who came with her, he groaned in the spirit, and was troubled, 34 and said, “Where have you laid him?” They told him, “Lord, come and see.” 35 Jesus wept. 36 The Jews therefore said, “See how much affection he had for him!” 37 Some of them said, “Couldn’t this man, who opened the eyes of him who was blind, have also kept this man from dying?” 38 Jesus therefore, again groaning in himself, came to the tomb. Now it was a cave, and a stone lay against it. 39 Jesus said, “Take away the stone.” Martha, the sister of him who was dead, said to him, “Lord, by this time there is a stench, for he has been dead four days.” 40 Jesus said to her, “Didn’t I tell you that if you believed, you would see God’s glory?” 41 So they took away the stone from the place where the dead man was lying.[a] Jesus lifted up his eyes, and said, “Father, I thank you that you listened to me. 42 I know that you always listen to me, but because of the multitude that stands around I said this, that they may believe that you sent me.” 43 When he had said this, he cried with a loud voice, “Lazarus, come out!” 44 He who was dead came out, bound hand and foot with wrappings, and his face was wrapped around with a cloth. Jesus said to them, “Free him, and let him go.” 45 Therefore many of the Jews, who came to Mary and saw what Jesus did, believed in him.