Mt. of Precipice from the Afula-Nazareth Rd.

The Mt. of Precipice is the mountain to the left of Mt. Nazareth on the right. 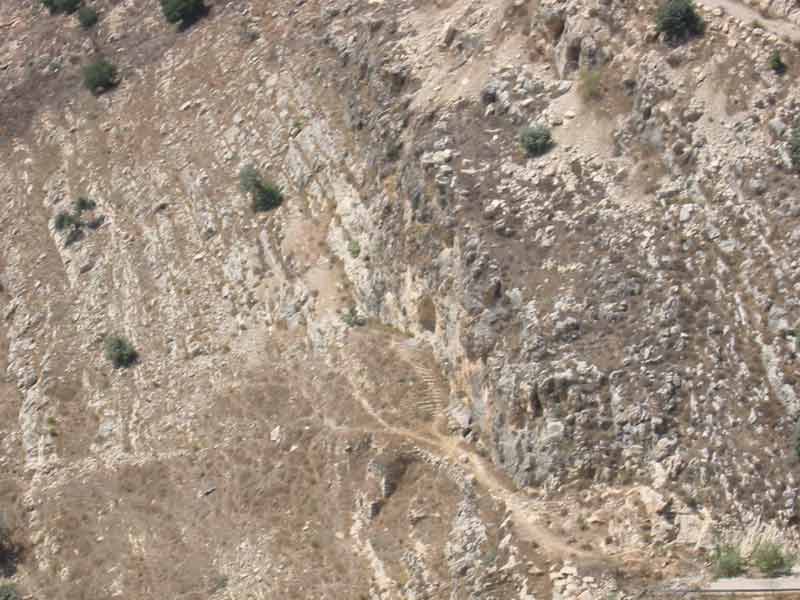 After a few hours in a library during 2007, I learned from Nazareth archaeologist/historian B. Bagatti that a very old tradition marks a cliff below the summit of Mt. Nazareth as the "Mount of Precipice." There were steps below the cliff and a platform with a niche in the center and a cistern to either side of the platform. This shrine below the cliff in the center of the photo might date back to Byzantine times. The hill is behind the Renaissance Hotel, Nazareth. In the second photo from the top this hill is to the left of the vertical rock cut on the high mountain.

Luke 4:16 (WEB) He came to Nazareth, where he had been brought up. He entered, as was his custom, into the synagogue on the Sabbath day, and stood up to read. 17 The book of the prophet Isaiah was handed to him. He opened the book, and found the place where it was written, 18 “The Spirit of the Lord is on me, because he has anointed me to preach good news to the poor. He has sent me to heal the broken hearted, to proclaim release to the captives, recovering of sight to the blind, to deliver those who are crushed, 19 and to proclaim the acceptable year of the Lord.” 20 He closed the book, gave it back to the attendant, and sat down. The eyes of all in the synagogue were fastened on him. 21 He began to tell them, “Today, this Scripture has been fulfilled in your hearing.” 22 All testified about him, and wondered at the gracious words which proceeded out of his mouth, and they said, “Isn’t this Joseph’s son?” 23 He said to them, “Doubtless you will tell me this parable, ‘Physician, heal yourself! Whatever we have heard done at Capernaum, do also here in your hometown.’” 24 He said, “Most certainly I tell you, no prophet is acceptable in his hometown. 25 But truly I tell you, there were many widows in Israel in the days of Elijah, when the sky was shut up three years and six months, when a great famine came over all the land. 26 Elijah was sent to none of them, except to Zarephath, in the land of Sidon, to a woman who was a widow. 27 There were many lepers in Israel in the time of Elisha the prophet, yet not one of them was cleansed, except Naaman, the Syrian.” 28 They were all filled with wrath in the synagogue, as they heard these things. 29 They rose up, threw him out of the city, and led him to the brow of the hill that their city was built on, that they might throw him off the cliff. 30 But he, passing through the middle of them, went his way.