THE PARABLE OF THE SHEEP AND THE GOATS 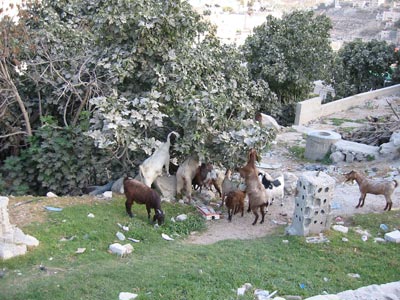 Goats feeding on a fig tree at Silwan, Jerusalem (Sept 2003)

Matthew 25:32 (WEB) Before him all the nations will be gathered, and he will separate them one from another, as a shepherd separates the sheep from the goats.

The desert nomad used the goat as a source of milk, cheese, butter, and goat hair for rough cloth or tent fabric. The desert black goat was able to go further without water than the sheep. The sheep herder used the sheep for milk, cheese, butter, and wool. A goat gives more milk than a sheep, yet it was seen doing more damage to the range. A goat prefers to graze trees and bushes, yet turned to eating grass and herbs when the bushes were overgrazed or when convenient. I watched a Silwan goat pulling grass out of the ground by griping it with its teeth and pulling. I then knew the saying that the sheep ate the grass but the goat took the grass and the roots. The goat was seen wasting more energy running around and this consumed more pasture than a sheep by burning calories in the length of its travels. The sheep was thrifty in not wasting as many steps. Some might prefer sheep and others goats, yet some herders kept mixed flocks. I read a book written by, Aref Abu-Rabia, The Negev Bedouin and Livestock Rearing (Berg Oxford/Providence) and learned that there was a problem amongst the sheep and goats at the feeding trough: "...the goats ate faster and were more aggressive using their horns to dominate the troughs and push away the sheep." The herder had to separate the two groups and send one group at a time to the trough to keep the peace and prevent injury.

The Roman author Varro (116 BC – 27 BC) wrote about goats destroying vineyards and olive trees while grazing on their leaves and branches. Varro continued his manuscript to praise the goats' worthiness on steep rocky terrain where other livestock could not graze. From Rerum Rusticarum Libri Tres, English translation from:  ROMAN FARM MANAGEMENT - THE TREATISES OF CATO AND VARRO DONE INTO ENGLISH, WITH NOTES OF MODERN INSTANCES BY A VIRGINIA FARMER, 1918, Project Gutenberg. 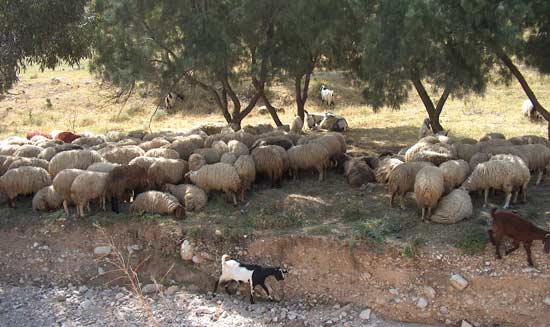 (April 2005 along Rt. 1 between Jerusalem and Jericho)

These sheep were resting about midday.  There was very little movement in the group of sheep and some of them seemed to have laid down for a nap.  Goats were walking around the edges of the group and the shepherd's donkey laid down to rest in the shade. The restless goats burned more fuel and required more pasture than the sheep who conserved their energy.

The meaning of the parable about separating sheep from goats is similar to Jesus' teaching in Matt. 10:16 Behold, I send you forth as sheep in the midst of wolves: be ye therefore wise as serpents, and harmless as doves. Jesus taught against violence, anger, and murder. The dove has no talons. The dove ate seeds. Doves were often seen resting on utility wires in pairs. This behavior conserved energy. They flew fast to escape danger. I have seen them feeding on the surface of the soil without scratching for seeds. A dove appeared to be pecking in the grass. Some bird(s) dug up squash seeds a farmer planted in his field leaving tell tale bird foot prints next to the looted seed locations. Seeds sown below soil will either sprout in a few days after steady rains or start to rot in the dampness. I watched a group of doves foraging on a lawn through a telescope and saw the birds were moving blades of grass, weeds, and debris above the soil to look for hidden seeds or snails. I watched a long time and saw they were not pulling grass or roots; nor digging for seeds. Occasionally the dove moved soil with its beak, but usually not. They eat seeds and sprouting seeds. Doves fed on leftover grain after harvest machinery dropped grain on the ground. They did not perch on stalks to steal grain. Doves did not try to chase birds out of their feeding areas. They shared space with other birds. A dove mated for life. They raised numerous baby birds in succession and reused the same nests. Young doves leaving nests sometimes stayed close to their parents for a time watching their parents foraging in areas close to the nest before the young doves had enough knowledge to become independent. Doves sometimes followed each other to feeding grounds and formed small flocks. Most doves are not aggressive. 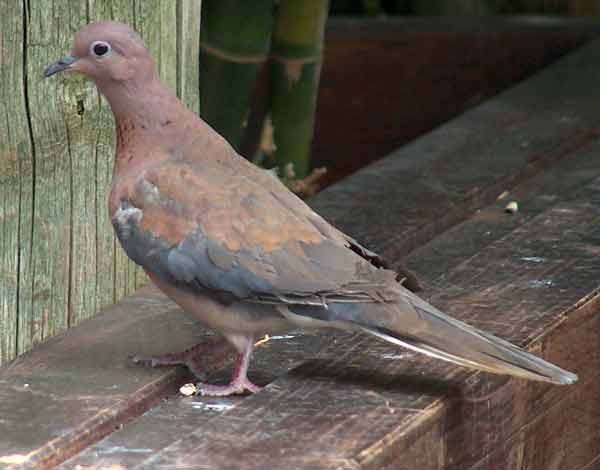