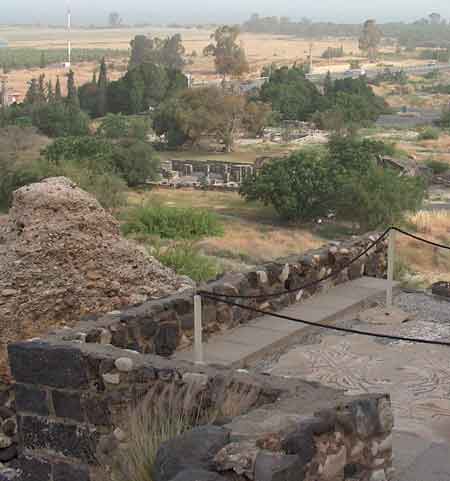 The ruins of Kursi are located above the eastern shore of the Sea of Galilee near En Gev. This is a view from a small shrine down to the Byzantine Church built to commemorate Jesus' miracle of taming a fierce demon possessed man.

MARK 5:1 (WEB) They came to the other side of the sea, into the country of the Gadarenes. 2 When he had come out of the boat, immediately a man with an unclean spirit met him out of the tombs. 3 He lived in the tombs. Nobody could bind him any more, not even with chains, 4 because he had been often bound with fetters and chains, and the chains had been torn apart by him, and the fetters broken in pieces. Nobody had the strength to tame him. 5 Always, night and day, in the tombs and in the mountains, he was crying out, and cutting himself with stones. 6 When he saw Jesus from afar, he ran and bowed down to him, 7 and crying out with a loud voice, he said, “What have I to do with you, Jesus, you Son of the Most High God? I adjure you by God, don’t torment me.” 8 For he said to him, “Come out of the man, you unclean spirit!” 9 He asked him, “What is your name?” He said to him, “My name is Legion, for we are many.” 10 He begged him much that he would not send them away out of the country. 11 Now on the mountainside there was a great herd of pigs feeding. 12 All the demons begged him, saying, “Send us into the pigs, that we may enter into them.” 13 At once Jesus gave them permission. The unclean spirits came out and entered into the pigs. The herd of about two thousand rushed down the steep bank into the sea, and they were drowned in the sea. 14 Those who fed them fled, and told it in the city and in the country. The people came to see what it was that had happened. 15 They came to Jesus, and saw him who had been possessed by demons sitting, clothed, and in his right mind, even him who had the legion; and they were afraid. 16 Those who saw it declared to them what happened to him who was possessed by demons, and about the pigs. 17 They began to beg him to depart from their region. 18 As he was entering into the boat, he who had been possessed by demons begged him that he might be with him. 19 He didn’t allow him, but said to him, “Go to your house, to your friends, and tell them what great things the Lord has done for you, and how he had mercy on you.” 20 He went his way, and began to proclaim in Decapolis how Jesus had done great things for him, and everyone marveled.

During Byzantine times this church (near the center of photo) was built along a five kilometer stretch of the east coast. There were steep slopes south of the church relatively close to the water. Early pilgrims thought this area was the likely spot of the swine running into the sea. There were caves that might have been the tombs the demoniac slept in. This church near the foot of the ridge is near the junction of roads 92 and 789.

A discussion of the variants Gadara, Gerasa, Gergesa at:  http://www.tektonics.org/harmonize/demoniactale.html

Where Wadi Samakh on the north side of Kursi empties into the lake near Ashalon Beach there are some low steep banks. The flow of the stream there is seasonal. Elsewhere on the lake there are steep banks along the shore also. The lake level may be lower than in ancient times as the outlet of the Jordan R. was lowered in order to construct a hydroelectric station. There were earthquakes in the area. One lowered part of Tiberias. An earthquake can raise or lower land. There has been sediment deposition after storms.

It is easier to imagine pigs running off a cliff accidentally and dying from the fall than running into the water drowning. Herds of swine running into the sea like lemmings have not been widely documented. Once a deer jumped off the top level of a parking garage and deer following him did the same. They all died. Spirits jumping from a person to animals is probably a corrupt observation written in terms in use 2000 years ago to explain some bizarre event or story. It is probably a textual error. Some mentally ill people claimed to be different people combined into one as in a split personality disorder. Such a one possessed with violence and antisocial behavior might have been unwelcome in towns, but lived outside of towns in cave tombs. Jesus was supposed to have tamed the wild man and made him gentle enough to find a place in the community. Jesus told him to return to his people and publish the great things God had done for him.

In some early Biblical manuscripts the demoniac was from Gadara; in other manuscripts he was from Gerasa or Gergesa. Some indicated they thought Gergesa was the village in the area of the Kursi church ruins. Gadara was also part of the Graeco-Roman Decapolis near the SE edge of the lake Galilee/Chinnereth in Jordan. The lake is visible from Gadara, Gadara, Jordan is above Hammat Gader, Israel. Eusebius (4th century) published the location of Gergesa as Kursi. Some travelers noticed a large number of tombs around the ancient city of Gadara across the Yarmuk River from Israel. There is a steep chasm with sheer cliffs along the Yarmuk R. near Gadara. Any animal falling there would perish.

In his Sermon on the Mount (Matthew 5:38) Jesus advised his audience: “You have heard that it was said, ‘Eye for eye, and tooth for tooth. 39 But I tell you, do not resist an evil person. If anyone slaps you on the right cheek, turn to them the other cheek also." Less violence erupted with this teaching. A slap on the cheek would not result in war.

Central aisle of church -- seating on benches or floor (April 2005) 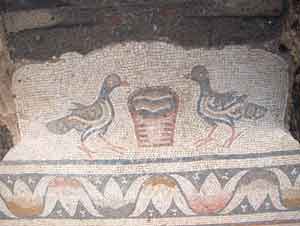 Another Discussion of the location of the Gadarene Demoniac and the Swine at Israel Photos IV:  https://dqhall59.com/israelphotosIV/kursi.htm