MATTHEW 17:20 "If you have faith as small as a mustard seed, you can say to this mountain, 'Move from here to there' and it will move. Nothing will be impossible for you."

Cicero (106 - 43 BC) wrote about faith, "And therefore we may follow the Stoics, who diligently investigate the etymology of words; and we may accept their statement that "good faith" is so called because that what is promised is "made good," De Officiis, Book 1 - Moral Goodness, 23 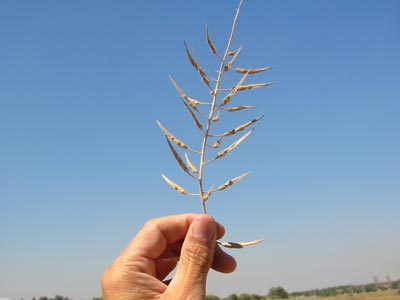 I taste tested seeds from the short pod brown-black mustard species shown on these pages. It was a hot and spicy mustard. I saw this species northern Israel, the Golan, and coastal plain between Tel Gezer and Acco. The range of the brown mustard was probably further south than Gezer and north of Tel Dan near the Lebanese border. Mustard seeds contain niacin (B3); a vitamin useful in lowering cholesterol levels. The mustard seed is the third leading source of edible oil in the world. Soybean and palm oil ranked first and second. The mustard oil may also be used as biodiesel. During Jesus' ministry in Capernaum people may have used the mustard seeds to prepare a sauce to season foods as mustard sauce was mentioned in the Talmud. 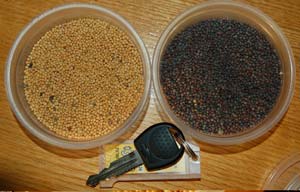 Both yellow and black mustard seeds purchased in Galilee (2006)