THE MIKVEH POOL AND THE BAPTISMAL

Leviticus 11 dealt with problems of unclean animals' carcasses falling into cooking pots or pitchers of water that had to be broken if they were made unclean. There were problems with people touching something unclean thus making the person unclean until evening. The person was not allowed to touch anyone else for fear of making others unclean. A person is required to wash after being made unclean, thus they built mikvehs. There were other passages that indicated a person was unclean if he had an emission of semen. A woman was thought to be made unclean by her menstrual period.

In addition to the Torah passages of Leviticus there are more laws in the Talmud. The Jerusalem Talmud contains some of this legal code about what was clean and what was not clean.

People used small pools called mikvehs to wash away ritual uncleanness thought to be on their bodies. One of the earliest dated mikvehs was one found at the Hasmonean palace in Jericho dated the time of John Hyrcanus (c. 175 BC - 104 BC) by archaeologist Ehud Netzer. There were many mikvehs in use in Jerusalem during second temple times. A mikveh was uncovered at the first century synagogue of Gamala in the Golan Heights region. A later mikveh was found at the synagogue of Khirbet Shamai near Meron in northern Israel. Ritual cleansing pools were present at Qumran. The sectarian Dead Sea Scrolls described a cleansing pool. Qumran scrolls may date between the 2nd century BC and the 1st century AD. Some mikvehs were deep while others were shallow and not deep enough for full immersion.

Mikveh at the Jerusalem Archaeology Park near the Western Wall, Jerusalem July 2006

Pigeon at a mikveh at Ophel-Jerusalem 2008

Some of the first century religious rulers were accusing Jesus of being unclean because he did not wash his hands.

Mark 7:1-9 (World English Bible) Then the Pharisees and some of the scribes gathered together to him, having come from Jerusalem. 2 Now when they saw some of his disciples eating bread with defiled, that is unwashed, hands, they found fault. 3 (For the Pharisees and all the Jews, don’t eat unless they wash their hands and forearms, holding to the tradition of the elders. 4 They don’t eat when they come from the marketplace unless they bathe themselves, and there are many other things, which they have received to hold to: washings of cups, pitchers, bronze vessels, and couches.) 5 The Pharisees and the scribes asked him, “Why don’t your disciples walk according to the tradition of the elders, but eat their bread with unwashed hands?” 6 He answered them, “Well did Isaiah prophesy of you hypocrites, as it is written, ‘This people honors me with their lips, but their heart is far from me. 7 But they worship me in vain, teaching as doctrines the commandments of men.’ 8 “For you set aside the commandment of God, and hold tightly to the tradition of men—the washing of pitchers and cups, and you do many other such things.” 9 He said to them, “Full well do you reject the commandment of God, that you may keep your tradition.

It is likely the mikveh/mikvat was responsible for the transmission of deadly bacteria from the ritual washing of one's body and subsequent contamination of the water from human feces, bacteria and viruses attached to the skin and clothes then washed into the pool. The mikveh was also used for the washing of pots, pans, and water pitchers (The Mishna Mikvaot (c. 150-250 AD)). The Talmud requires new kitchen utensils to be dipped in the mikveh. Parts of the Talmud teachings were passed down orally until they were recorded in writing. Cholera, typhoid, dysentery, diarrhea, salmonella, e-coli and polio were transmitted through water. When the Jews got home from the market they may have feared they touched something that had been touched by something unclean and may have washed their hands with pitchers washed in the mikvehs as it was required for a new pitcher to be dipped in the mikveh. Jesus not washing his hands before eating may have been good practice as they did not have chlorine for water purification in those days. The Roman baths were also likely to be polluted during times of epidemics. Little was known about the mysterious uncleanness thought to be in corpses, women who had menstrual periods, and dead reptiles. If a house were thought to contain a leprosy it was torn down. There was also a law that the ashes of a burnt red heifer mixed with water could cure one of uncleanness. Red cow ashes were no more than a placebo for a people with primitive ideas about what was sanitary and clean.

In the 19th century British missionary doctors arrived in Turkish controlled Tiberias. During a cholera epidemic a missionary doctor went to the local governor and got him to post a guard where the Muslim women were washing their clothes and instructed them to wash the clothes at a separate beach from where they drew their drinking water from the lake to avoid the likelihood of getting cholera.

Ritual mikveh use seemed to have ended in Judea during the second century A.D. This was when Hadrian ordered the Jews out of Judea after they rebelled in the Bar Kochba War. There is a mikveh at Khirbet Shammai near Meron that may have been in use during the third century in the corner of a synagogue found there. There was a mikveh from the third century found during an IAA salvage dig at Tiberias before construction of a wastewater treatment plant (IAA reports, No. 22, c. 2004). The use of the mikveh in late Roman times has been argued to be the case at Sephoris also. In modern times only a few who practice Judaism use mikvehs as modern sanitary practice is better understood than superstitious passages from the Torah.

John the Baptist and the disciples of Jesus were both reported to have baptized in the flowing Jordan River. There is evidence some early Christian sects turned to pouring water over a person as a form of baptism. Some modern sects sprinkle water as a form of baptism. The baptism is only supposed to be a once in a lifetime event, yet there have been recent arguements that infant baptism is not voluntary and adults should voluntarily seek baptism. A Christian named Louis Pasteur discovered the practice of pasteurization to eliminate bacteria. It is the bacteria in stagnant water that is more likely to make one ill than touching someone who has touched a dead reptile or a menstruating woman. 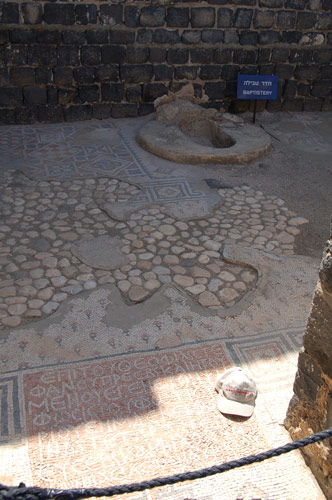 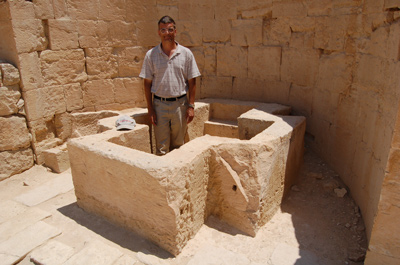 Shivta (see photo above) was near the border of Israel and Egypt in the Negev. The Byzantine era inhabitants were Christian and built two large churches in the town.

1 Peter 3:21 (WEB) This is a symbol of baptism, which now saves you—not the putting away of the filth of the flesh, but the answer of a good conscience toward God, through the resurrection of Jesus Christ,

John the Baptist taught repentance is required for forgiveness to occur. This was not contingent on sacrificing animals and burning them on a temple altar in Jerusalem. Early Jewish Christians chose to reject part of the Jewish laws in favor of a new covenant. The Jewish prophet Jeremiah foretold the future establishment of a new covenant:

Jeremiah 31:31-34 (WEB) Behold, the days come, says Yahweh, that I will make a new covenant with the house of Israel: and with the house of Judah: 32 not according to the covenant that I made with their fathers in the day that I took them by the hand to bring them out of the land of Egypt; which my covenant they broke, although I was a husband to them, says Yahweh. 33 But this is the covenant that I will make with the house of Israel after those days, says Yahweh: I will put my law in their inward parts, and in their heart will I write it; and I will be their God, and they shall be my people: 34 and they shall teach no more every man his neighbor, and every man his brother, saying, Know Yahweh; for they shall all know me, from their least to their greatest, says Yahweh: for I will forgive their iniquity, and their sin will I remember no more.