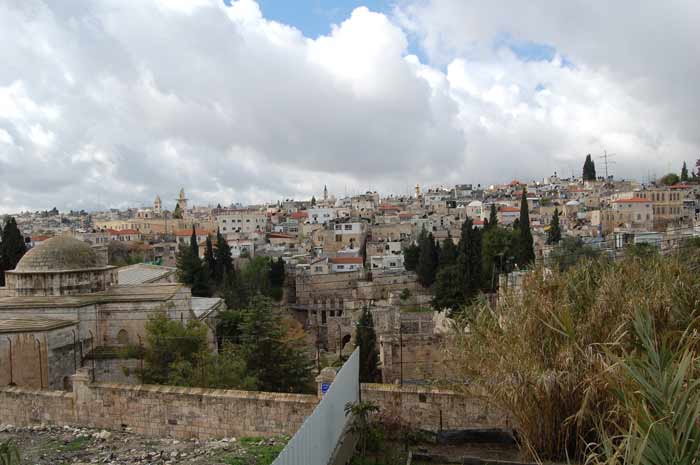 The Pool of Bethesda ruins are to the right of the basilica dome. The hill of Bethzatha may be seen rising in the background and ascending to the right.

A view of the hill of Bethzatha from St. Steven's Gate in the lower left ascending to the NW. The yellow line indicates the location of the Bethesda pools

Bethzatha is Greek for the hill in the NE section of the city that was thought to be outside the second city wall (outermost wall of Jerusalem) during the time of Jesus ministry to Jerusalem. The location of this wall was described by the Roman historian Flavius Josephus. Bethzatha was near the Sheep Gate mentioned in the Gospel. Bethzatha was an area known as the "New City" that was later enclosed by a third city wall built by Herod Agrippa after Jesus' glorification. This area is near the modern gate of the old city called St. Stephen's Gate by Christians.

There was a trench separating the second wall and the new city on the northern hill called Bethzatha; Josephus War Book V, Chapter 4. The pools of Bethesda may have been outside or inside the Sheep Gate mentioned in the Gospel. I have read that it was outside the wall, but have not seen the proofs.

The yellow line along the wall of Jerusalem in the upper right corner indicates the area of the pools of Bethesda during the first century of the Christian era. The modern eastern wall from the left corner (SE) as far as the area near the yellow line is close to the position of the Roman era wall as the SE corner contains partially preserved Herodian construction.